The California Water Association (CWA) held its 77th Annual Conference October 29-30 at the Monterey Plaza Hotel with the theme “Safe Reliable Water: What Can We Afford?” Keith Switzer, CWA First Vice President and Golden State Water Vice President, hosted the event. He introduced former California Assembly Member Anna Caballero (D-Salinas) as the conference keynote speaker. Caballero was elected to the California State Senate on November 6 and now represents the 12th Senate District, which covers Salinas in the west, Coalinga in the south, Merced in the north and the west, and Madera to just west of Fresno in the eastern part of the district.

Caballero’s remarks focused on “The Intersection of Water Affordability and Utility Consolidation,” as well as her 2018 legislation, including Assembly Bill 2050. The bill combined both elements of affordability and consolidation by creating regional public water system authorities throughout the state that would allow troubled, non-sustainable small systems to be combined into a larger entity that would, presumably, provide economies-of-scale to minimize rates.

She also discussed her support for the Proposition 3 water bond ballot measure that failed on November 6 and her opposition to the State Water Resources Control Board’s (SWRCB) proposed amendments to the Bay-Delta Plan, which called for increased flows in the Lower San Joaquin River and three tributaries, the Tuolumne, Stanislaus, and Merced Rivers. The SWRCB passed a set of conditional amendments on December 12 that includes the increased flows mandate, yet also allows for a negotiated settlement framework between water users and the Department of Water Resources that calls for voluntary water-use curtailments and funding for habitat improvements.

Lawrence Morales, CWA President and East Pasadena Water President, discussed the “State of the Association,” which focused on CWA’s strategic goals and 2018-9 Action Plan that includes assisting in critical areas such as low-income assistance, consolidation, and long-term water use efficiency. Morales wrapped up his review with a list of CWA’s notable accomplishments in 2018, including multiple successes in the legislative and regulatory arenas and achievements on supplier diversity, communications, public outreach, and small company assistance. 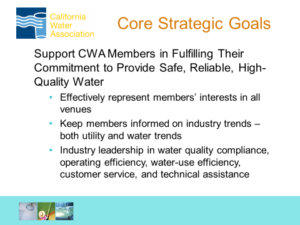 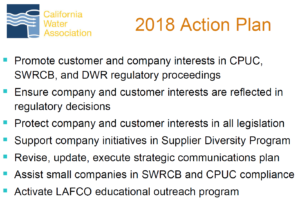 In 2019, CWA will focus on ongoing CPUC rulemakings, implementing regulations for conservation legislation, finetuning state policy on consolidations, executing a new strategic communications plan, and searching for a new executive director in advance of Jack Hawks’ retirement. As always, CWA’s emphasis in all arenas will remain on what’s best for customers and employees. 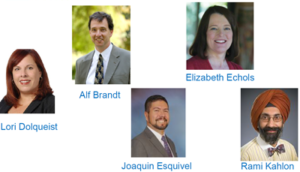 Esquivel said that access to safe, clean water for all Californians should take precedence over attempting to finalize a policy toward a statewide low-income ratepayer assistance (LIRA) program. He noted his appreciation of the regulated utilities’ successful efforts on their consolidations, and said he had no preference on utility ownership as long as systems with impaired drinking water were replaced by systems that provide safe, clean water. Kahlon followed with a review of past CPUC-regulated utility consolidations and exactly what the CPUC was planning for its ongoing affordability and LIRA rulemakings.

Dr. Manuel Teodoro, Associate Professor, Texas A&M University, spoke on the challenge of understanding and measuring affordability of water bills. He explained that an accurate assessment of affordability is critical when serving low-income customers while raising the revenue necessary to maintain and advance public health and conservation. He outlined factors affecting water affordability, including decreased federal spending on water and wastewater infrastructure since the 1980s; national health expenditures as a share of the gross domestic product; the disconnect between productivity and a typical worker’s compensation; and the nexus between conservation and drought. 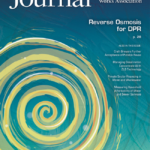 During his luncheon address on “A New Direction for Regulated Water Utilities.” Chief Executive Officer Robert Powelson, National Association of Water Companies, discussed the top three issues facing the water sector: infrastructure investment, industry fragmentation, and water accountability. Citing the American Society of Civil Engineers’ “2017 Infrastructure Report Card,” Powelson said more than 2 trillion gallons of treated drinking water are wasted annually due to an estimated 240,000 water main breaks. With more than 1 million miles of pipes nearing the end of its useful life in the U.S., $1 trillion in infrastructure replacement will be needed over the next 25 years. He also illustrated the extent of fragmentation in the water industry compared with natural gas and electric utilities.

Referring to the September 2017 Bipartisan Policy Center (BPC) report, “Safeguarding Water Affordability,” Powelson pointed out three factors for addressing water affordability challenges: partnerships with the private sector, sound asset management, and strategic infrastructure investment. He also cautioned that “low water rates should not always be seen as a badge of honor” since rates historically have been set too low for a variety of reasons. Powelson also quoted from the BPC report that “with their economies of scale and service efficiencies, private companies can bring savings in water system operations and maintenance costs of 15 percent to 30 percent.”

The fourth assessment involved over 100 authors and features more than 50 reports, which were peer reviewed by experts from within and beyond California. The assessment predicts a substantial rise in temperature and sea levels, wildfires of greater magnitudes than those experienced in 2017, and wetter winters with drier springs. Andrew outlined actions for managing wildfires and water supplies and outlined the organizational barriers and governance challenges that can delay and prevent local governments from taking action. He also discussed levee subsidence rates, implications of the Paris Agreement in California, and various climate scenarios. Andrews concluded with actions to mitigate public health, coastal, and energy impacts. 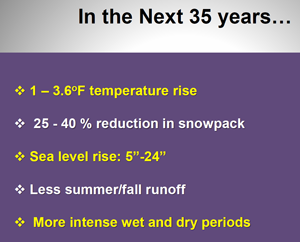 Brooks primarily centered her remarks on SB 606 (Hertzberg) and AB 1668 (Friedman), two water management planning bills. She outlined drought and conservation milestones from 2014 to 2018 and summarized “Making Water Conservation a California Way of Life” and the Department of Water Resources’ water use and efficiency standards, including variances for unique water users and reporting requirements. 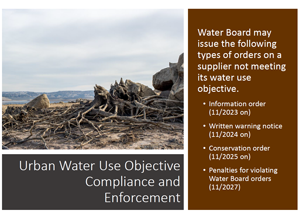 Dickinson explained the components of calculating water-use targets as well as CalWEP’s strategies to achieve its primary goal of “assisting water supplier partners by providing as-needed information, expertise, and services that will enable them to meet municipal or utility-adopted water-use goals, as well as legislative and regulatory requirements.” She also provided an overview of CalWEP’s 15 compliance tools and the outreach and media toolkit available at https://calwep.org/. 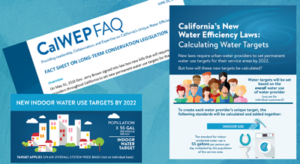 Ken Sansone, Partner, SL Environmental Law Group, PC, spoke on “Making Polluters Pay for Treatment Costs.” He discussed the option of using product liability law as a weapon to punish polluters, including lawsuits against manufacturers of aqueous film-forming foam used in fire suppression; per- and polyfluoroalkyl substances (PFAS) used in industry and consumer products; and 1,2,3- Trichloropropane used as a paint and varnish remover, industrial solvent, cleaning and degreasing agent, and in certain pesticides.

Sansone explained that PFAS contamination costs could be recovered for the value of water lost due to wells taken out of service; drilling new wells, including costs of investigation, exploration, and purchase of alternative sites; the design, construction, operation, and maintenance of treatment facilities; extending service to private wells; and purchasing water from other sources. Sansone wrapped up his presentation by outlining the concerns and realities of employing lawsuits to punish polluters. 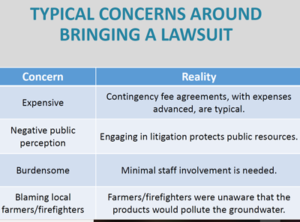 The conference concluded with a compelling presentation on “California’s Wildfires: The Growing Threat to Our Quality of Life,” by Ruben Grijalva, Retired Director, California Department of Forestry and Fire Protection (CAL FIRE), and owner of FireChiefs.com LLC. Grijalva gave an overview of CAL FIRE’s resources and role in partnering with federal and local agencies to protect California’s 100 million acres. Given CAL FIRE’s objective of suppressing 95 percent of all wildfires to 10 acres or less, Grijalva described the steps the department has taken to comply with Governor Schwarzenegger’s Executive Order S-05-09 on wildfire preparedness and resources. He also outlined the conditions for a “perfect fire storm” in California and described how CAL FIRE organizes and deploys its resources during the various stages of wildfires while working within the state’s mutual aid system. 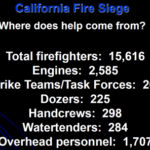 Grijalva outlined various ways to prevent firestorms, including better land use/planning, increasing “fuels treatment,” building with ignition-resistant materials, ensuring adequate local emergency response resources, increasing surge capacity, and improving utility maintenance. He closed his presentation by discussing who and what are to blame for wildfires and the impact of Senate Bill 901 on ratepayers and electric utilities. 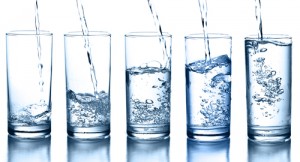 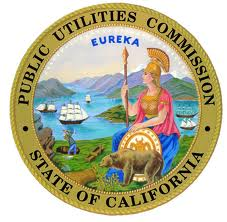