The California Water Association’s (CWA) article, “Lessons Learned from California’s Investor-Owned Water Utilities,” appeared in the December 2016 edition of WaterWorld magazine. The article outlined several innovative approaches CWA member companies have employed to comply with Governor Brown’s April 2015 Executive Order mandating a 25-percent reduction in water use between June 2015 and March 2016, as compared with the same months in 2013. The article also includes steps the water utilities are taking to prepare for the future while working closely with the California Public Utilities Commission on conservation regulations. 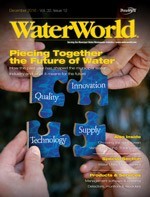