Noting that its member investor-owned utilities (IOUs) have favorably responded to Governor Jerry Brown’s call for reduced water use by its customers, the California Water Association (CWA) expressed strong support for the State Water Resources Control Board’s (SWRCB or Water Board) extension of the Emergency Regulations for Statewide Urban Water Conservation in a March 16, 2015, comment letter to the Water Board. The Water Board subsequently adopted the extended and expanded regulations on March 17 in a unanimous vote that was codified in a new SWRCB Resolution No. 2015-0013.

In its letter, CWA noted that fully half of the California Public Utilities Commission-regulated utilities’ reporting districts have consistently exceeded the state average each month for reported reduced water production and several also have reported declines in water production exceeding the Governor’s 20 percent goal. CWA said these results for the water IOUs were comparable to their public agency and municipal counterparts.

To this end, CWA requested that the State Water Board assist water utilities and municipalities with media and customer communications by actively addressing the second point in the 10th “Be It Further Resolved That” statement in the Water Board’s Item 7 resolution, which reads: “Water suppliers that face budget shortfalls due to reduced sales should take immediate steps to raise necessary revenues in a way that actively promotes continued conservation” (e.g., develop fact sheets and conduct media interviews that help the public understand the facts behind conservation and drought-induced reductions in water use).

“Virtually every water agency in the state is doing just that,” CWA said, “but they are being unjustly criticized in the media for being responsible managers.” In his public testimony at the March 17 SWRCB meeting during considering of the emergency regulations, CWA Executive Director Jack Hawks said any help that the State Water Board can give with respect to media understanding and coverage would be appreciated.

In the news release announcing extension and expansion of the emergency regulations, State Water Board Chair Felicia Marcus cautioned that March 17 decision was not a final action. “We are experiencing the lowest snowpack and the driest January in recorded history, and communities around the state are already suffering severely from the prior three years of drought,” she said. “If the drought continues through next winter and we do not conserve more — the consequences could be even more catastrophic than they already are. Today’s action is just a tune-up and a reminder to act, and we will consider more significant actions in the weeks to come.”

The new regulations expand upon those approved last July, which will continue under the renewed program. Specifically, all Californians are now prohibited from:

New prohibitions to which commercial businesses must adhere include (in addition to those above):

According to the SWRCB, the biggest change for urban water suppliers (those utilities with more than 3,000 service connections) is the creation of a minimum standard for outdoor irrigation restrictions. Urban water suppliers now must limit the number of days per week that customers can irrigate outdoors. The limit must be specified in the utility’s water shortage contingency plan within 45 days of the effective date of the regulation. If the plan contains no specific limit, then the restriction is no more than two days per week. If the plan currently contains different language (e.g., odd-even days, limits on the number of minutes per day, seasonal limitations, etc.), it is valid under the new regulation.

The water utilities and agencies have additional obligations. They will be required to notify customers when they are aware of leaks that are on the customer’s side of the meter. The current monthly reporting requirements to the SWRCB will be expanded to include the utility’s limit on days for outdoor irrigation, plus a description of its compliance and enforcement efforts with respect to those customers who are violating the water-use prohibitions.

For smaller water suppliers (those with less than 3,000 service connections), the expanded regulation clarifies that if they choose to implement alternate mandatory measures, in lieu of limiting outdoor irrigation to twice a week; those measures should be designed to achieve a 20 percent reduction in water consumption.

Local agencies can fine property owners up to $500 a day for failure to implement conservation requirements. Water IOUs do not have the authority to issue such civil citations and fines, so they must rely on the willingness of their local government authorities to enforce the fine provisions. The State Water Board, however, can issue ‘cease and desist’ orders against water utilities that don’t impose mandatory conservation measures upon their retail customers and those violating a cease and desist order are subject to civil liability of up to $10,000 a day.

The new regulations were submitted to the Office of Administrative Law (OAL) for approval on March 20, 2015, and OAL approved them on March 27, at which time the regulations took effect. They will expire on Decemeber 23, 2015. For more information, please visit the SWRCB’s Emergency Water Conservation web page (http://www.waterboards.ca.gov/waterrights/water_issues/programs/drought/emergency_regulations_waterconservation.shtml). 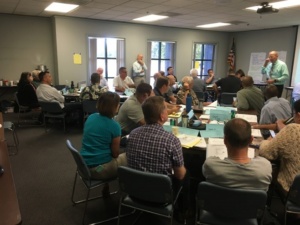