California Water Association’s (CWA) seven largest investor-owned water company (IOWC) members had a banner year in 2013 in contracting with Women, Minority, Disabled-Veteran Business Enterprises (WMDVBEs) according to the annual reports on supplier diversity procurement filed with the California Public Utilities Commission (CPUC) on March 1, 2014. Through the Utility Supplier Diversity Program (USDP), the IOWCs identify and qualify diverse suppliers and encourage them to compete for contracts to supply goods and services.

For the first time, the aggregate percentage of the seven IOWCs exceeded the 21.5 percent WMDVBE procurement goal originally established by the CPUC in its General Order 156 (GO 156) in the late 1980s for gas, electric and telephone utilities. In 2010, the California Legislature added regulated water utilities to the GO 156 program following an initial period of five years of voluntary participation by the IOWCs.

“The CWA member companies should be very proud of this exceptional achievement,” said CWA Executive Director Jack Hawks. “Today, the regulated gas, electric and telephone companies are extraordinarily successful with their supplier diversity programs, which they have been working on for more than 25 years. I am pleased to note that since the water companies began reporting their progress in 2011 under the protocols of GO 156, collectively, they reached the overall procurement goal in just three years.”

In 2013, the combined procurement of the IOWCs from WMDVBEs was more than 23 percent of total procurements, or $111 million of a total procurement amount of $481 million. This was an increase of 40 percent, or almost $37 million, above 2012 levels. All seven IOWCs exceeded their 2012 expenditures qualified under the program.

The IOWCs access a large network of suppliers and service providers that reflect California’s diverse population. In 2013, the IOWCs contracted with 469 certified vendors, more than 130 above the previous high in 2012. Services commonly provided by the vendors fall into categories such as construction, maintenance and repair, promotional services, transportation, warehousing and professional services.

The 2013 achievements demonstrate the commitment of the IOWCs to supplier diversity. Of particular note, both California Water Service Company and Golden State Water Company (GSWC) doubled their 2012 WMDVBE procurement, with GSWC reaching 25.7 percent, its highest level ever. San Jose Water Company increased procurement from businesses owned by disabled veterans by 300 percent, while San Gabriel Valley Water Company increased its 2012 diversity procurement by 54 percent. And, Park Water Company at 37.2 percent, Suburban Water Systems at 32.2 percent and California American Water at 29.8 percent all exceeded the GO 156 goal by a considerable margin.

“The seven IOWCs work collaboratively to identify and share best practices and remove barriers to expand opportunities for WMDVBEs,” said Charmaine Jackson, Manager of Supplier Diversity & Community Involvement for San Jose Water Company and Chair of CWA’s USDP Committee. “Through outreach programs, the IOWCs engage businesses that might otherwise not be aware of the products and services needed by water utilities. The IOWCs also encourage their prime contractors to use WMDVBE subcontractors.”

For more information about the supplier diversity program, click on Doing Business at www.cwacontent.local, which includes links to the IOWCs’ websites. 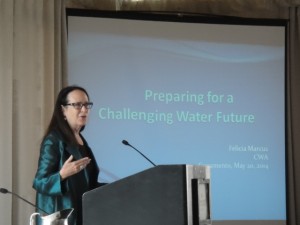