On May 18, 2016, the State Water Resources Control Board (SWRCB) adopted a revised version of the Drought Emergency Water Conservation Regulation (Regulation) and extended it through January 2017. During her luncheon address at California Water Association’s (CWA) Spring Conference (see related article in this edition of On Tap), SWRCB Vice Chair Frances Spivy-Weber noted the Regulation was intentionally extended only for a short term (through January 2017) to allow time for the SWRCB, the Department of Water Resources and the California Public Utilities Commission to develop long-term strategies.

Earlier in May, CWA and California Water Service (Cal Water) submitted letters in response to the proposed Regulation issued on May 9, 2016, which would create a path for water suppliers to develop and implement conservation standards tailored more to their unique water supply and demand conditions. CWA’s letter cautioned, “Conservation standards should be responsive to local circumstances, as well as current hydrological conditions, in order to minimize further drought ‘fatigue’ among water utility customers.” The letter included several recommendations such as encouraging collaboration and communication, adopting a minimum conservation standard of 8 percent in concert with the self-certification supply assessment option and allowing water utilities to aggregate local water sources in their reporting. Cal Water’s letter included recommendations to establish a conservation floor of 10 percent and continue the current prohibition on serving drinking water only upon request in food establishments.

The final Regulation converts the existing demand-based conservation standards to a supply assessment and includes a “stress-test” approach requiring water agencies to self-certify a three-year water supply, assuming three additional years of drought comparable to the previous three years (2013 through 2015). Those agencies facing supply constraints will be required to meet a mandatory conservation standard equal to the amount of the constrained supply. For example, if an agency self-certifies a 10-percent supply shortfall, the mandatory conservation standard would be 10 percent. The projections and calculations used to determine the new conservation standards will be publicly available on the SWRCB’s website. As to the state board’s decision not to institute a minimum conservation floor, Spivy-Weber explained that the SWRCB believes the focus should be on developing long-term strategies through 2017, rather than allocating staff time to work on short-term strategies associated with a mandated floor.

The final Regulation requires urban water suppliers to continue monthly conservation reporting and preserves prohibitions against over-watering landscapes or watering during and within 48 hours of measurable rainfall; washing rather than sweeping sidewalks; using hoses without cutoff valves; and using potable rather than recirculated water in fountains and water features. Existing hospitality requirements for lodging and eating establishments will remain in effect.

While the adopted Regulation keeps the specific prohibitions against certain water uses in place for all utilities (e.g., watering down a sidewalk or overwatering landscape causing run-off into gutters), customers of smaller water utilities with less than 3,000 service connections or that serve less than 3,000 acre-feet annually no longer have the two-day a week outdoor watering restriction. Also, these smaller utilities are no longer required to reduce their water production by 25 percent relative to the amount produced in 2013. They will still have to identify their total potable water production by month from December 2015 through November 2016, compared to the same months in 2013, in a report due on December 15, 2016. Additionally, the smaller suppliers will have to provide prompt notice to customers when they determine a leak may exist on the customers’ side of the meter.

On June 6, 2016, the California Public Utilities Commission (CPUC) released two versions of a Proposed Resolution W-5103 for comment that address the SWRCB’s new Emergency Regulation. Option A of W-5103 directed the regulated water utilities to follow the direction of the Emergency Regulation and make a choice between the self-certification supply assessment and continuing with the existing mandated water-use reductions. Option B calls for the investor-owned water utilities (IOUs) to select as their conservation standard the higher of their self-certification standard and their current SWRCB conservation standard.

Comments on Proposed Resolution W-5103 were due on June 13, 2016, and several public water agencies joined CWA and its member companies in filing comment letters with the CPUC, stating they supported Option A and opposed Option B. CWA’s letter stated:

“The IOUs should be given the same opportunity that the public water agencies will have to ask their customers to align water use behaviors to comport with changing conditions going forward. While that may spell relief from strict conservation mandates in the near term, it also may mean ramping up the efforts and urgency to conserve again after a short period of relative supply stability. CWA believes that this would be a reasonable course of action. Option B has the potential to confuse customers and, frankly, to alienate them …”

“In addition to making it more difficult for the IOUs to make sure their customers receive the right message and set appropriate goals, the regulatory incongruity could damage water conservation efforts if the customers of the IOUs perceive that their water suppliers are artificially inflating the present drought danger. In CWA’s view, clear customer messaging is the state’s most effective tool for managing a long-term drought with respect to urban water users. Option B impairs the effectiveness of that tool.” 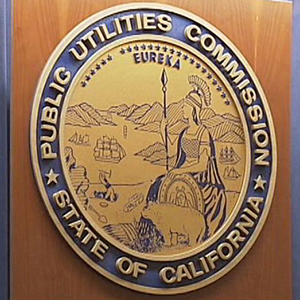