The audit confirmed Cal Water complied with all state regulations requiring rates to be justified and warranted through the comprehensive general rate case (GRC) process managed and approved by the California Public Utilities Commission (CPUC). These GRCs are required by state statute to be filed every three years, and they are designed to determine whether the costs proposed by an investor-owned utility (IOU) to be recovered in its rates are necessary, reasonable and fair.
The report pointed out that rates for all four utilities had risen during the three-year audit period of 2011-2013; however, Cal Water’s and the municipal utilities’ rates differed for several reasons. One reason is that municipal utilities, unlike Cal Water, have other sources of revenue outside of rates that allow them to keep water rates lower than they otherwise would be. And as a CPUC-regulated water utility, Cal Water is required to pay fees and taxes to the cities and counties in which it operates, which is not the case with municipal utilities.

According to the audit report, municipal utilities “receive revenues from monthly water rates and from additional sources, primarily taxes based on the assessed value of properties in their service area. These additional revenue sources help…cover their costs and, therefore, can contribute to lower monthly water rates for their customers.” 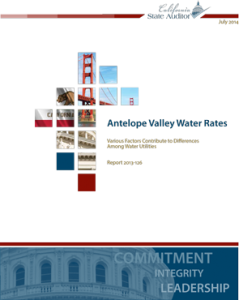 Another reason for the rate differences is the size of Cal Water’s Antelope Valley District, which serves only 1,400 customers, making it the smallest utility of the four. The report explained that, “service areas with a dense population of service connections allow water utilities to disperse their fixed costs over a larger number of water customers, resulting in lower overall monthly bills, whereas service areas with fewer service connections result in higher monthly bills because the water utilities must spread their fixed costs across fewer water customers.”

The report also noted that “Cal Water is authorized by the CPUC to offer rate assistance programs and currently offers two different types of assistance to certain demographics of valley water customers.” The three municipal utilities do not offer rate assistance and are not required to do so. In addition, Cal Water is reducing costs to customers by pumping more groundwater to decrease expenditures on imported water and by continually identifying and implementing operating efficiencies.

“Our priority is to provide our customers with reliable, high-quality and affordable water service,” said Martin A. Kropelnicki, Cal Water President and Chief Executive Officer, in a press release issued in response to the audit. “In maintaining reliable water infrastructure and ensuring that we always meet or exceed all state and federal water quality standards, we are constantly also working to operate as efficiently as possible to minimize the cost impacts to our customers.”

Kropelnicki concluded, “We are committed to being a good partner by operating transparently and always providing excellent service to our customers.” 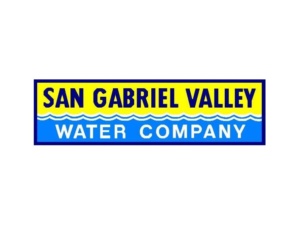