For the third consecutive year, the water utilities regulated by the California Public Utilities Commission (CPUC) achieved the CPUC’s goal under General Order 156 (GO 156), which established voluntary procurement goals for its regulated utilities (energy, telecom, water). The goals specify that 21.5 percent of the utilities’ contracting, sub-contracting and operational expenditures are to be transacted with women-owned (5 percent), minority-owned (15 percent) and disabled veteran-owned (1.5 percent) business enterprises (WMDVBEs). According to mandatory annual reports filed with the CPUC in March, the regulated water utilities collectively had a “diverse spend” in 2015 of $131.5 million or 22.7 percent of their total eligible procurement ($579.4 million).

In a March 30, 2016, press release, the CPUC said that the utilities participating in its supplier diversity program had hit a new milestone of procuring more than $8.9 billion in goods and services in 2015 from WMDVBEs. Of the more than 30 companies participating in the supplier diversity program, the two Liberty Utilities’ water company subsidiaries, Park Water Company and Apple Valley Ranchos Water Company, were called out as one of the utilities having done the most business with diverse firms, reporting 39.9 percent of their procurement with was WMDVBEs.

“I’m really pleased that we had another good year of utility spending with diverse businesses, which are by and large small businesses,” said CPUC President Michael Picker. “Year after year the utilities have been steadily increasing their financial commitment to diverse firms; in large part because it’s a prudent financial decision and helps bring prosperity and jobs to the communities where consumers live and work.”

A significant milestone in 2015 was the inclusion of lesbian, gay, bisexual and/or transgender (LGBT) businesses in the supplier diversity program. Assembly Bill 1678 (Gordon) extended the provisions of GO 156 to LGBT-owned businesses, and the CPUC formalized its inclusion into GO 156 in 2015. Water utilities were ahead of the 2016 timeline for reporting this spend. However, to not detract from the original components of the 21.5 percent overall goal, the spend with LGBT could be reported, but not considered, in the 21.5 percent target.

While the collective percentage achieved by water utilities in 2015 was slightly lower than in 2014 at 23.4 percent (principally because of an accounting switch from an accrual to a cash basis required by the CPUC), the use of certified diverse business enterprises increased in 2015 to 486 vendors from 469 in 2014 (see accompanying chart). 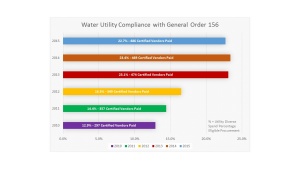 As was the case last year, CPUC Utility Supplier Diversity Manager Stephanie Green and her team have scheduled meetings with the utilities to discuss their reports. These meetings will enable the CPUC to assess executive leadership and support for the supplier diversity programs, clarify information provided in the reports and obtain more specific information about 2016 plans. The meetings also will allow time for both the CPUC and utilities to provide input and suggestions on enhancing program performance and improving future reports.